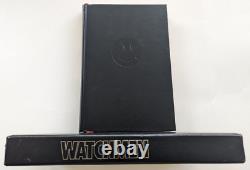 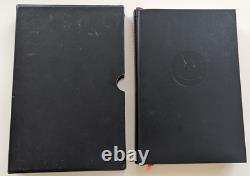 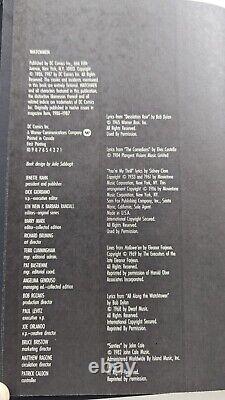 Watchmen Limited Edition HC with Slipcase - Graphitti Designs/DC Comics - 1988. Art by Dave Gibbons, and Colors by John Higgins. It was published monthly by. In February 1988, DC published a limited-edition, slipcased hardcover volume, produced by Graphitti Designs, that contained 48 pages of bonus material, including the original proposal and concept art. I bought this in the late 90's at the Mega-Con in Orlando and it has been sitting on my bookshelf since then.

Watchmen is set in an alternate reality that closely mirrors the contemporary world of the 1980s. The primary difference is the presence of superheroes. The point of divergence occurs in the year 1938.

Their existence in this version of the United States is shown to have dramatically affected and altered the outcomes of real-world events such as the Vietnam War and the presidency of Richard Nixon. In keeping with the realism of the series, although the costumed crimefighters of Watchmen are commonly called "superheroes", only one, named Doctor Manhattan, possesses any superhuman abilities.

The war in Vietnam ends with an American victory in 1971 and Nixon is still president as of October 1985 upon the repeal of term limits and the Watergate scandal not coming to pass. The Soviet invasion of Afghanistan occurs approximately six years later than in real life.

When the story begins, the existence of Doctor Manhattan has given the U. A strategic advantage over the Soviet Union, which has dramatically increased Cold War tensions. Eventually, by 1977, superheroes grow unpopular among the police and the public, leading them to be outlawed with the passage of the Keene Act. While many of the heroes retired, Doctor Manhattan and another superhero, known as The Comedian, operate as government-sanctioned agents. Another named Rorschach continues to operate outside the law. All names that are used in our descriptions are registered trademarks of their respective companies. I value my reputation when it comes to the products I list. Stating that the item is indeed questionable. For more information on my. This item is in the category "Collectibles\Comic Books & Memorabilia\Comics\Comics & Graphic Novels".