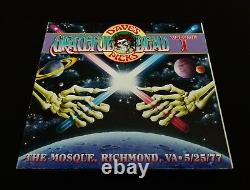 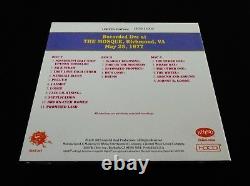 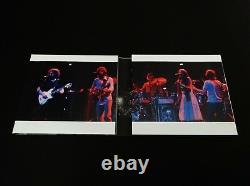 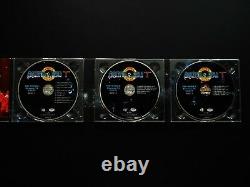 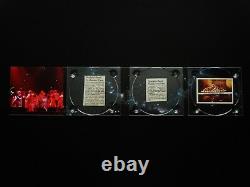 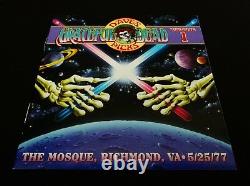 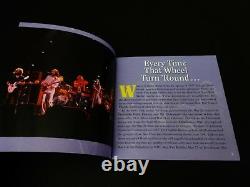 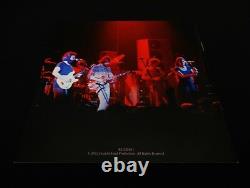 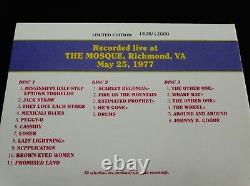 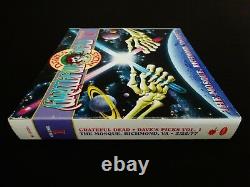 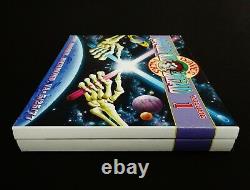 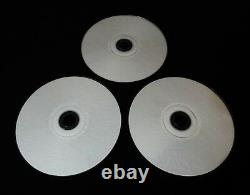 But, we do all well know just how opinionated those " Best Year " conversations can go - so here I will indeed subside. However, we probably all can agree that 1977 was composed of some seriously silky-smooth live deliveries - right? - and arguably one of the Band's major' Prime' periods.

Well, May 1977 has over the years delivered some of the best musical notes, tones, song versions, transitional segues & jams that my ears have ever heard. We all have that " one " tape (or moment) that got us " On The Bus " - and from that point on... I must admit that mine personally was the 2nd Set of Atlanta on 5/19/77 from a Good Ol' real-raspy soundboard tape too - in the'80's! After listening to that Uncle John's Outro-Jam a time or two or, realistically...

That was it for me, and there was no turning back!! Well, here we are at The Mosque! In Good Ol' Richmond, VA just less than a week later... And what do we have?

Yep, you guessed it - more of the " Silky-Smooth ". Mellow-yellow until the Cassidy build, then Garcia uncorks a heavy-duty Loser. Then yet another Lightning > Supplication burner! From this magical May'77 run.

The Scarlet > Fire is indeed " as advertised " and I think this was really a main reason I was handed this one well over 15+ years ago in 1st Gen. I remember being quite impressed then, and a listen to this newly remastered version just reinforced what my memory was saying to me.

The He's Gone > Estimated takes intense to the delicate & subtle. May I also note that Drums > Space is especially nice!

Is kicked-down on Disc 3 with a String-Section meets Rhythm-Section flat out burner... Other One > Wharf Rat > Other One! With a quite stand-out and very pretty August West right in the middle! The Other One outro driving this Spaceship lands gently onto a fine Wheel, just before both Around & Around and Johnny B.

Goode sends the Mid-Atlantic & beyond Dead Fans home happy campers yet once again! I must say, this is pretty much incredible " mastered " sound, taken straight from the original reels I assume - and not a momentary glitch to my ears all throughout. Excellent recycled packaging as well, far superior to the " Road Trips Series " cardboard Cases that would provide light marks & scratches to the discs upon factory insertion. These are some very nice & stylish trays here for this relatively new (2012) Series - protecting the discs nicely, and they look fairly durable too!

" Dave's Picks " Volume One (1) indeed the " Inaugural " Series release for this newest G. I don't know about you, but I just can't wait to see what-else! Is coming on down the road in the fine Future of this G. Call it what you want to, but just release-it!

As the masses of G. Fan Faithful are way-ready & our ears are waiting anxiously - as this is indeed what we live for, right fans?

And for good reason too... A little Star Wars Lightsaber! Themed Cover Art by Scott McDougall!!

Grateful Dead " Dave's Picks " release!! A small Limited Edition number of 12,000 was decided on for each Volume (of 4) for this Inaugural 1st!

This Volume 1 Inaugural 1st! So it is now Out of Print for good, and no more Sets will be manufactured for sale. As you can well-imagine, these have been very quickly finding their ways into permanent' no-sell' collections.

The item "Grateful Dead Dave's Picks 1 Volume One Mosque Richmond 5/25/1977 Star Wars 3 CD" is in sale since Friday, September 25, 2020. This item is in the category "Music\CDs". The seller is "springfromnight1989" and is located in Portland, Oregon. This item can be shipped worldwide.