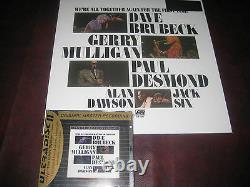 DAVE BRUBECK AUDIOPHILE SET FOR THE COLLECTORS WHO WANT IT ALL IN THE FINEST CD'S AND VINYL WITHIN ONE LISTING. & TYPE IN MFCD DAVE BRUBECK INTO THE SEARCH FIELD WITHIN OUR STORES SECTION AS YOUR PERSONAL CODE AND ALL INDIVIDUAL MFSL 24 KARAT GOLD CD TITLES + INFORMATION WILL APPEAR. Each MFSL 24 KARAT GOLD CD was pressed directly from the original studio master session tapes ; the purest source of musical information and engineered to produce the finest CD sound quality available.

Every compact disc delivers the music to you with all the depth, dynamics, and richness of the live recording session. We invite you to hear the three-dimensional quality of the music just as the artist intended for it to sound.

The proprietary mastering technology extracts and transparently stores more musical information from the original master tapes than any other method in existence. For the discriminating listener, the results include: a wider range of frequencies, increased depth and room dimension cues, clarity, and separation of instruments. The technology substantially decreases characteristics such as hardness and glare bringing the sound of CD even closer to the warmth and openess of analogue.

Aluminum particles are rough, resulting in pits and irregularities on the playing surface. Gold particles are uniform and have a constant rate of reflection giving an even, reproductive sound quality. Also, 24K Gold CDs will not oxidize or tarnish and will last for years longer than traditional aluminum CDs. Collectors Note : Over the last year about 90% of these MFSL titles were still available at numberous audiophile dealers.

Do your home work and you will soon realize that you will be one of the last people in the world to own this sonic gem and this one time Holiday Special Pricing. This is a true Collector's find for those individuals who want to own the finest and rarest pieces of musical history. It is similar to owning the artist's own Rare Gold Record Album in a Gold CD pressing. You will be one of the last people in the world to own these Limited Edition Long Out of Print Masterpieces that will add true value to your Collection. On this listing before it skyrockets in value or will never be seen again. This 24-Karat Gold Limited Edition FACTORY SEALED CD is an audiophile collector's item that simply gives the feeling of being directly in the studio with the artist. This recording is mastered from the Original Session Tapes and the disc is custom pressed using 24-Karat Gold (known for its superior qualities and resistance to oxidation). This Out of Print Gold bonafide collectible disc has all Liner Notes, Photos, and Artwork from the Original LP faithfully recreated. A SONIC WORK OF ART. Dave Brubeck We're All Together Again For The First Time 180 GRAM LIMITED EDITION Import LP. Includes a Definitive Live Version of "Take Five"! Featuring Gerry Mulligan, Paul Desmond, Alan Dawson & Jack Six! With a career that spans over six decades, Dave Brubeck's experiments in odd time signatures, improvised counterpoint, polyrhythm and polytonality remain hallmarks of innovation.

Throughout his career Brubeck has continued to experiment with interweaving jazz and classical music. He has performed as composer-performer with most of the major orchestras in the United States and with prestigious choral groups and orchestras in Europe and America.

During the late'60s and early'70s, Dave Brubeck used to jam with baritonist Gerry Mulligan, along with The Dave Brubeck Trio's regulars Jack Six on bass and drummer Alan Dawson. When Paul Desmond joined on alto sax, the newly formed quintet recorded several live dates which resulted in We're All Together Again For The First Time (1973).

The album contains a definitive live version of Brubeck's classic "Take Five" which takes up half the B-side of the record, showcasing the prowess of every member. Other interesting tunes include "Rotterdam Blues" and "Koto Song", where Paul Desmond takes center stage.

[Desmond's] interplay with Mulligan is consistently delightful. Together they are heard live in Europe on'Truth,' Mulligan's'Unfinished Woman,''Rotterdam Blues' and a definitive 16-minute rendition of'Take Five.

In addition, Desmond is showcased on'Koto Song' and as an encore Brubeck plays a lighthearted if brief'Sweet Georgia Brown. Scott Yanow, allmusic, Rated 4/5 Stars Features. Import Musicians: Dave Brubeck, piano Alan Dawson, drums Paul Desmond, alto saxophone Gerry Mulligan, baritone saxophone Jack Six, bass. Mymusicfix has been told we have the best collection of Rare, Out of Print music collectibles on E-Bay. International Buyers - Please Note. OUT OF PRINT PRODUCT is IRREPLACEABLE and therefore NOT RETURNABLE. Because of Postal Regulations in following countries -- U. International Buyers are responsible for their country's.

This item is in the category "Music\CDs". The seller is "mymusicfix2" and is located in this country: US.