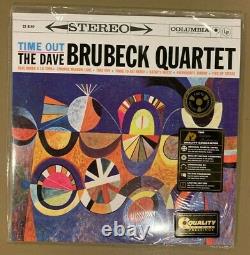 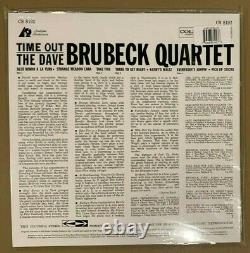 Analogue Productions and Quality Record Pressings present the definitive. By The Dave Brubeck Quartet. First time reissued as a gatefold jacket, with rare black and white photos from the Columbia Studios recording session. Heavy-duty chipboard shell stock by Stoughton Printing. 200-gram, double LP set cut at 45 RPM by Bernie Grundman and pressed at Quality Record Pressings. The results speak for themselves: the platters from QRP are in my experience the most consistently flat and quiet being pressed today... At least for the foreseeable here and now, Analogue Productions' newly mastered 45 RPM (Brubeck) is the edition to own.

You'll hear it right from the familiar piano intro to "Blue Rondo a la Turk, " where Brubeck's playing seems richer, more lyrical, more rhythmically alive. It seems to me that as our gear gets ever more quiet, these QRP LPs continue to wring more musical nuance from the finest recordings.

However, this current pressing is so much better than those that came before it, which were certainly very good, that it's obvious things have improved considerably over the past year. It's a positive sign when the noise floor is defined by the hiss of the master tape, not the quality of the pressing or vinyl, and that's the case here. Having heard many, many Pallas and RTI pressings, the main competition for QRP, I would say that. QRP pressings combine the strengths of both its competitors: the very low surface noise and bottom-of-the-groove quiet of Pallas LPs and the sharp delineation of musical detail of RTI. Sound = 4.5/5; Music = 5/5 Marc Mickelson.

Virtually all serious and even casual music lovers ought to be familiar with, or at least are likely to have heard The Dave Brubeck Quartet, even without realizing it for the quartet's best-known hit "Take Five" has graced the soundtracks of multiple films, including "Mighty Aphrodite, " "Pleasantville" and Constantine. The piece is famous for its distinctive, catchy saxophone melody, as well as its use of unusual 5/4 time so distinctive, it's a rare jazz track that became a pop hit.

Including the monster hit "Take Five, " the Brubeck Quartet's. Is a jazz and audiophile classic.

Every album collection needs a copy. The dead-quiet double-LP, with the music spread over four sides of vinyl, reduces distortion and high frequency loss as the wider-spaced grooves let your stereo cartridge track more accurately. But it's more than just the vinyl that makes this release so special. For the first time in its history. Is presented here packaged in a deluxe gatefold jacket. Inside are eight fantastic black and white images shot during the recording session at Columbia's famous 30th Street Studios. Sony Music supplied the images for use in our SACD reissue, and gave us persmission to use them in our LP reissue as well. The jacket is also special very heavy-duty. It's produced for us by Stoughton Printing featuring a printed wrap mounted to a heavyweight chipboard shell, producing an authentic "old school" look and feel.

This jacket is a beauty! S colorful iconic cover art looked so vibrant. The record label's sales executives didn't want a painting on the cover when.

Debuted in 1959 on Columbia Records, Brubeck told an interviewer. An entire album of originals?

That wouldn't work either, he was told. Some standards and some show tunes were needed in the mix.

Fortunately, Brubeck ignored the conventional wisdom and. Became the original classic we know it as today. Brubeck became proof that creative jazz and popular success can go together. The album was intended as an experiment using musical styles Brubeck discovered abroad while on a United States Department of State-sponsored tour of Eurasia.

In Turkey, he observed a group of street musicians performing a traditional Turkish folk song that was played in 9/8 time, a rare meter for Western music. Paul Desmond, who was Brubeck's alto saxophonist, wrote "Take Five, " at Brubeck's urging to try and write a song in quintuple (5/4) time. "I told Paul to put a melody over (drummer) Joe Morello's beat, " Brubeck explained. As a jazz pianist, Brubeck became a household name in jazz in part due to.

Demond's cool-toned alto and quick wit fit in well with Brubeck's often heavy chording and experimental playing. Morello and bassist Gene Wright completed the group. The Quartet traveled and performed constantly around the world until breaking up in 1967 to pursue other musical ventures. Pop albums chart and was certified platinum by the Recording Industry Association of America. "Take Five" became a mainstream hit, reaching No.

This item is in the category "Music\Vinyl Records". The seller is "markalarie" and is located in Coventry, Rhode Island.