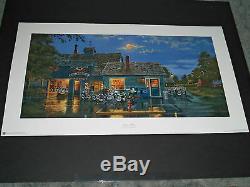 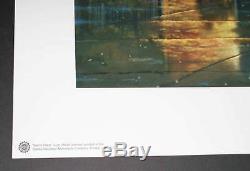 It's been kept in a protected environmentally controlled art vault. It has never been framed. No scratches, no fading, no yellowing. It's image size is Large. The colors are rich and beautiful.

The piece makes a statement that friends and neighbors will admire. I have 100% feedback and stand by my description of the condition of this print.

Do Not Wait as this will go fast at much less than retail if you could find one. EXTREMELY LOW PRICE FOR THIS BEAUTIFUL PRINT!!

Thanks John David Barnhouse, named the 3rd most popular artist in America by the U. Art Gallery magazine, re-creates the best of times in his nostalgic Americana depictions of small town America.

Celebrations of rural family life as portrayed in these prints convey the camaraderie central to those who share common interests. Dave Barnhouse recreates the best of times in his definition of rural and small town America. His portraits are freeze frames of life the way he remembers it in the 1950s and 60s. Collectors tell me they often put themselves in my art.

It's a way we all can relive some of the happiest moments of our youth. Currently, Barnhouse has settled into the Americana genre, constantly working with illumination and adding a nostalgic touch to make viewers feel they are actually present and part of the painting. Barnhouse's works have earned many awards and honors. He has been included in InformArt's "Top Ten Hottest Artists" list and he has been voted one of America's most popular print artists in dealer surveys conducted by U.

ART magazine Dave Barnhouse is a self-described "country boy" from Richmond, Ohio who grew up in small towns and has no intention of leaving their environs either physically or emotionally. "I want my art to make people feel as if they were back home on a Friday eveing, so they can experience the warmth of a cozy fire and smell the homemade bread and cookies coming from the oven, " he says.

Barnhouse's works have earned many awards and honors, and he has been included in InformArt's "Top 10 Hottest New Artists" in 1995, and he has been voted one of America's most popular print artists in dealer surveys conducted by U. Art magazine for the last four years.

The item "Dave Barnhouse Sam's Place Signed (With Harley Logo's) Very Rare Mint" is in sale since Sunday, October 27, 2019. This item is in the category "Art\Art Prints". The seller is "murdocs" and is located in Pullman, Washington. This item can be shipped worldwide.