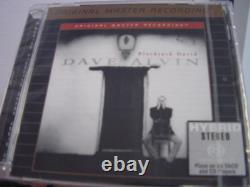 DAVE ALVIN - BLACKJACK DAVID - SACD - Super Audio CD is re-mastered by Mobile Fidelity. The greatest advancement since the introduction of stereo, Super Audio CDs employ the innovative single-bit encoding system, Direct Stream Digital. Every SACD player performs superbly with Compact Discs. And Hybrid SACDs will play back beautifully on CD players. Dave Alvin has become one of America's great unsung songwriting heroes. His unflinching portraits of modern romance-on-the rocks set the Blasters apart from their roots rocking peers in the early 1980s. In the 1990s, his solo work moved closer to contemporary folk, meaning that the same guys who once tried to steal his guitar licks are now trying to copy his lyric lines. They'll find plenty to plunder here, from the outstanding "Abilene" to The Way You Say Good-Bye. " Occasionally, as on "New Highway, Alvin starts to repeat himself, but he does it with such authority, with such a world-weary sigh, that it hardly matters. Steel guitar whiz and longtime Alvin compadre Greg Leisz offers tasteful, mostly acoustic production. ONE PERSON STATED ABOUT THIS PRESSING. I own over 300 albums and this one is my favorite.

I have listened to it at least 100 times and chills still run down my spine during certain songs. Dave Alvin has a gift for writing authentic songs about the common human experience, which is often tragic. I don't think Dave Alvin is technically a "good singer" but the inflection in his baritone voice conveys the perfect emotion to match the lyrics.

For instance, "Mary Brown" is a masterpiece. As a criminal defense attorney, I recognize the "Charlie Thomas" in that song. He recognizes that his crime is objectively wrong but, at least in his clouded mind, subjectively right and for the love of Mary Brown [he'd] do it all again. Dave Alvin's inflection one this one is melancholy, eerie, and at times sinister--almost snarling--and it makes the song perfect. "California Snow" is tragic, haunting, sublime, and it's the best song on the album (Dave, I believe, co-wrote this w/ Tom Russell, who also sings it on one of his albums, but not as well). I'm against illegal immigration but this song puts a human face to it that's hard to forget. "Abilene" and "From a Kitchen Table" convey the bleakness of everyday lives and the lyrics stick with you. "1968" is a memorable portrait of the undying bonds of male friendship/comraderie. There are some good bluesy rockers on this album too, but it's the ballads that makes it great. Dave Alvin's story songs on this album bring to my mind St Augustine's famous prayer: Thou hast made us for Thyself, O Lord, and our hearts are restless until they rest in Thee. Do yourself a favor and add this album to your collection. International Buyers - Please Note.

OUT OF PRINT PRODUCT is IRREPLACEABLE and therefore NOT RETURNABLE. International Buyers are responsible for their country's. Many people have told us we have the best Rare Out of Print Pristine Sealed music collectibles on E-Bay. This item is in the category "Music\CDs". The seller is "mymusicfix2" and is located in this country: US.